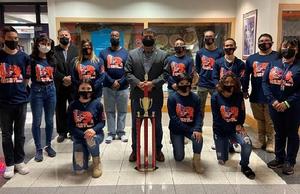 On Saturday, April 10, 2021, while most people were home in their warm beds, the Johnny Economedes High School Raider Team loaded an activity bus at 6:30 a.m. The destination was La Copa Ranch in Falfurrias, TX. The students have been preparing themselves for the La Copa Ranch, Gladiator Raider Challenge since mid-February. These students have conquered hours of being in the grueling heat of over 90 degrees running in the Army Combat Uniform wearing combat boots, preparing themselves to compete in this year's event. Many students tried out, but very few made the team. The AJROTC instructors, Senior Army Instructor (SAI), CPT Richard McBride, and Army Instructor (AI) Sergeant First Class Micaela Reyes knew that the odds were against them. They knew that if their raider team had a chance in competing with schools in and out of the Rio Grande Valley, they would have to improvise some of the training. During practice, the students found themselves running 1-2 miles carrying 20 lbs. medicine balls along with 40-pound kettlebells. CPT McBride said, "We do not have the same luxury as other schools. Since there is no obstacle course on campus to prepare for these events, we were able to collect old tractor tires from a local tire store." Sergeant Reyes soon found herself being pulled by the Johnny Economedes High School Raider Team for 50 meters to simulate the vehicle pull.

Senior Reymundo Reyes led the raider team during the event. Reyes said that he enjoyed

getting the opportunity to lead his raider team through this strenuous event.

believes was the factor in placing 1st during the challenge.